If places were people, Medellin, in northwest Colombia, wouldn’t be voted “most popular.” But it might be “most likely to succeed.” That’s because the City of Eternal Spring (nicknamed for its temperate year-round climate) is also a city of eternal optimism. 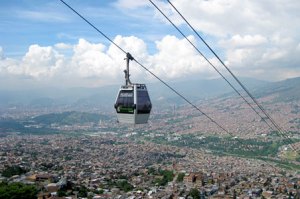 In fact, Medellín’s most attractive feature may be the positive outlook of its 3.5 million inhabitants who, generally, seem as vivacious as poster girl Sofía Vergara. The pride they take in having turned their town’s violent reputation on its head is obvious when you see them strolling the lovely botanical gardens, perusing the sculptures in Plaza Botero, lingering over tinto (slang for coffee), or simply rumba-ing the night away.

To understand the magnitude of change over the past decade, ascend to Biblioteca Espana: an architecturally-stunning library in what had been an isolated mountainside slum. The trip up on the ultra-modern Metrocable offers fabulous views.

Insider’s Tips: Come between December and mid-January for an illuminating experience. During the Festival de la Luz millions of colored bulbs light up Medellín creating one of the world’s most dazzling holiday displays.

Branch Out: Arguably the most popular day-trip destination is Santa Fe de Antioquia, a charming 16th-century enclave 50 miles northwest. This and other outings can be arranged by Land Venture Travel. Its menu includes everything from half-day coffee plantation tours to overnight eco-adventures.

Getting Here
American Airlines, which has been serving Colombia since 1990, travels direct from Miami to Bogotá, Medellín, and Cali. Colombian-bound flights are also available through Delta, United, and JetBlue. Within the country, flying is the most efficient way to get from city to city. Avianca, Copa, and LAN all cover domestic routes as well as international ones.

When to Go
Positioned at the very top of the continent, Colombia is a mountainous country that’s bordered by both the Pacific Ocean and the Caribbean Sea, so it has many climatic zones. But, overall, December through March is the optimal time to go weather-wise.

A Word on Safety
Despite huge leaps forward, the national tourism board slogan—”the only risk is wanting to stay”—still isn’t completely accurate. Isolated towns and rural areas are best avoided. In urban centres, commonsense dictates that you take the same precautions you would elsewhere in South America.