In the other last-four match, Italy will be seeking a win over familiar opponents Spain who beat them at the same stage in the previous two major tournaments. 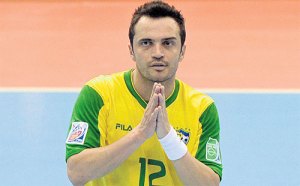 Defending champions Brazil, who have played in all seven World Cups, are clear favourites against Colombia who are playing in their first-ever finals.

Four-time world champions Brazil have more experience but Colombia are widely regarded as party crashers who eliminated Iran in the last 16 round and Ukraine in the quarter-finals at Thailand 2012.

Brazil’s progress to the semi-finals was not as smooth as predicted. Indeed, they needed a dazzling individual performance from superstar Falcao to claim a 3-2 extra-time win against quarter-final opponents Argentina.

Brazil forward Je will miss today’s game after being sent off against Argentina, while Colombia’s Yefri Duque will also be absent.

The odds are against them but Colombia are determined to create a bigger upset.

“Why not dream of beating Brazil too?” Colombia coach Arney Fonnegra said after the Ukraine match.

Colombia star Angellott Caro declared: “Brazil don’t scare us. We have nothing to lose and everything to gain.”

Brazil thrashed Colombia 5-1 in their last meeting but Caro said Colombia were now a different team.

“None of us here are scared,” he said. “Respectful, yes, because we know who they are. But that’s as far as it goes. If we didn’t have faith in ourselves, we wouldn’t be here now. We have to dream.”

Italy and Spain have met several times in major tournaments with the Spaniards snatching a 3-2 extra-time win at the 2008 World Cup semi-finals and a 1-0 victory at the Euro semi-finals eight months ago.

Despite history being against them, Italy are clearly in the mood to defy the odds. Their quarter-final against Portugal saw them overturn a 3-0 deficit to bounce back for a 4-3 win in extra time.

Spain, meanwhile, had to show plenty of solidity in their 3-2 defeat of Russia, whose group-stage performances marked them as a serious threat.

With both sides able to field full-strength teams, the match is a mouth-watering prospect. Striker Torras and Co will be looking to guide Spain to a remarkable fifth World Cup final in a row.

Italy, led by Saad Assis, are chasing revenge against the side that also beat them 2-1 in the 2004 World Cup final in Taiwan.

Italy’s in-form forward Rodolfo Fortino could also be a threat for two-time world champions Spain. The 29-year-old has scored six goals and is one of only three players to find the net five games in a row at Thailand 2012.

“I expect it to be a close game, just like the one we played against Russia and the last time we played Italy at the Futsal Euro. But I think we can beat them again,” said Spain coach Venancio Lopez.