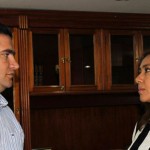 The wife of the governor from the south of Colombia has publicly ridiculed her husband, accusing him of being an “embarrassing puppet” of the national government in an open letter in which she surrenders her office.

In the letter, the wife of Caqueta governor Victor Isidrio Ramirez wiped the floor with her husband, accusing his administration of being “disloyal to its purpose” and can only claim a “poor balance of deceit and frustration.”

First Lady Maria Yenny Joven went on in the open letter, accusing her husband of being “unaware of concepts such as loyalty and honesty.”

Instead of working for the well-being of his state, the Caqueta governor is an “embarrassing puppet” of national politicians in Bogota, said Joven in the letter.

“You, mister Governor, far beneath the oath you took before the community that elected you, are unaware of the concepts of loyalty and respect for your state [and are] daring to import ‘brains’ possibly rejected in their own regions of origin for their ineptness and inefficiency demonstrated in the two years of this sorry administration.”

Citing her discontent with her husband as politician as reason, the First Lady said she would surrender her office and from now on attend the needs of the people of Caqueta from home.

The blasted governor did not immediately respond to his wife’s criticism.