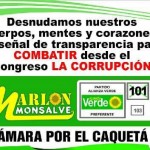 In order to promote “transparency” in government, a congressional candidate from the south of Colombia decided to strip naked as part of his election campaign for the House of Representatives.

Green Alliance candidate Marlon Monsalve appears sitting on a wooden stool stark-naked on a poster he hopes will help get him elected come March’s congressional elections.

“We strip naked our bodies, minds and hearts as a sign of transparency to combat corruption,” the poster said.

The anti-corruption candidate took advantage of the attention his poster attracted to sarcastically criticize electoral fraud through vote-buying.

Monsalve promised voters, “I will give you ten thousand for your vote … ten thousand reasons and motives without buying one vote.”

The candidate also admitted that as an elected representative he plans to steal, “smiles,” not money.

In an interview with Colombia Reports, Monsalve explained he decided to strip naked, not just for the publicity value, but also as a biting political statement. “I belong to a team with very little economic resources. The nudity and other publicity works are a gamble to call the attention to the form and the substance.”

The regional Green Alliance director told El Tiempo she has no problems with her candidates electoral strategy.

“The party seeks to wake up the interest of those who are not part of any political movement and young people. We do politics with these types of initiatives that are innovative,” she was reported as saying.

According to Monsalve, the responses to his revealing campaign have been mainly positive, “but there are others who do not agree, generally the chiefs of other campaigns who want to see it as a scandal.”

Colombians from the Caqueta department will be able to elect their naked candidate on March 25, when the country takes to the polls to elect a Congress for the 2014-2018 period.