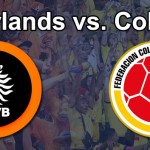 Colombia faces the Netherlands in a friendly on Tuesday after a surprising victory in Belgium last Friday. The Dutch, widely considered favorites, are not too certain of a win following a disappointing 2-2 against Japan.

The match between Colombia and the Netherlands is the first in soccer history. The “Cafeteros” and the “ClockWork Orange” never found each other on the same field.

For senior Dutch defender Ron Vlaar, a possible encounter with striker Radamel Falcao would be the highlight of the game. “It’s a nice challenge. I am looking forward to it,” he told press.

The Colombians, who qualified for Brazil convincingly, will begin the first match against the Netherlands in history confidently after surprisingly defeating Netherlands neighbor Belgium 2-0 on Thursday.

The Dutch, who haven’t lost a match since losing to the Belgians in August 2012, showed to be reserved about their chances after a disappointing 2-2 equalizer against Japan on Friday.

“We’ll have to do better against Colombia, this is obvious” Vlaar said.