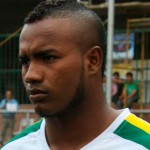 Reyes’ teammate, Luis Enrique Diaz was also injured during the incident but survived after being treated at a nearby hospital in Santa Marta. Both players are members of Union Magdalena, a Santa Marta-based club team.

The fatal shooting took place Wednesday at 9PM after the gunman burst into a hair salon and shot the two soccer players.

Magdalena Union teammate Julio Murillo was also present at the time of the shooting but remained unharmed during the incident.

Reyes, 22, was born in the town of Unguia in the department of Choco in western Colombia. He played as a striker for Union Magdalena.

Diez, 26, born in the town of Riofio in the department of Cauca Valley, played defense for the Santa Marta team.

The motivation behind the shooting remains unclear. So far, police have reportedly yet to announce any arrests or suspects.