Shirtless protesters fight draft to cover up in Cartagena 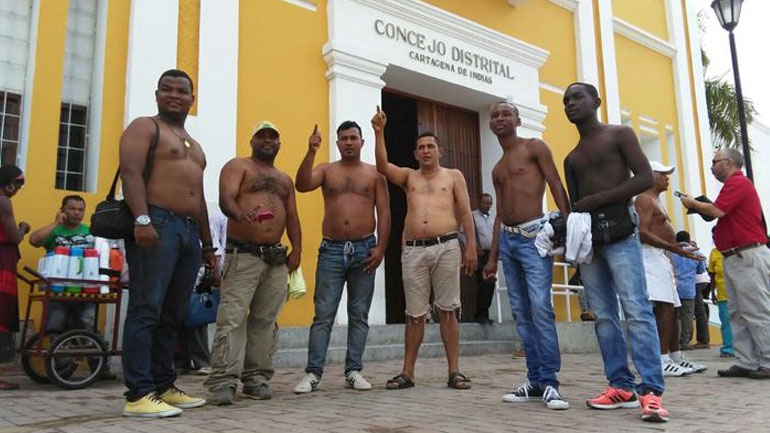 Shirtless protesters have taken to the streets of Cartagena in opposition of a draft to ban those without satisfactory attire from entering parts of the coastal holiday destination.

The individuals protested, whilst exposing themselves, outside the headquarters of the city’s district council. They are fighting the draft that states “whereby transit and admission to public places defined in bathing suit and no shirt is regulated.”

Ariza Moses, who led the protest in the colonial city stated that “Cartagena is a tourist town, and as such can not prevent a tourist from taking their shirt off, also we have to consider the tremendous heat we have that each day increases more”.

The bill was filed by Councilor Cesar Pion last week, regulating areas of the city tourists in beachwear or without shirts would be able to enter, with those violating this forced to pay a fine or attend a civic workshop. He claims, “People have to respect this city.”

“It is unacceptable that tourists make use of spaces as religious centers, theaters and shopping centers topless. Our children are being exposed to these images, which in turn are patterns that can be copied,” said the official.

The star of the drama is arguably lawyer Joaquin Torres who went shirtless to work on Thursday, in demonstration of what he believes to be a freedom of expression.

“I will go to the courts, the government and the mayor, and visit my clients shirtless to protest this absurd initiative to restrict the right of Colombians,” said the lawyer.

Torres marched through the town center without his shirt, with the words “Do not sell your vote” and “SOS Cartagena” written on his body. He received a mixture of applaud and shock from locals.

The attorney then demanded to be allowed entry to the public debate in the city council, in possession of a suit demanding authorities to respect his right to walk topless. According to the attorney, his choice of clothing is a legitimate exercise of fundamental human rights.

He was refused entry to the courthouse nevertheless and the public hearing was postponed until Monday.

The post Shirtless protesters fight draft to cover up in Cartagena appeared first on .