Shakira to perform during 2014 World Cup in Brazil 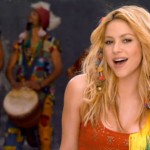 It will be the third time the Colombian pop princess has participated in the World Cup, after her famous “Waka Waka” was the theme song in South Africa, and an appearance in Germany during the 2006 games.

The official theme of this year’s World Cup will be performed by Puerto Rican Ricky Martin, who returns to the games following a 1998 World Cup appearance in France.

The Arab Idol winner Assaf was the one to break the news of his joint performance with Shakira at the international soccer match.