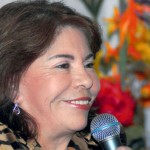 A scandal arose in Colombia Wednesday after the mother of a prominent evangelical Senator appeared in a video posted to Youtube asserting that disabled people should not be allowed to become church pastors.

Senator Alexandra Moreno is a member and co-founder of the MIRA evangelical political party.

The Senator’s mother Maria Piraquive, a leader in the Christian neo-charismatic Church of God Ministry of Jesus Christ International, was caught on tape openly discriminating against handicapped people who wish to ascend the leadership of her church.

“If [the congregation] sees a preacher without an arm, they’re not going to like that very much. For our consciousness, others would say for aesthetics, we will not put him in the pulpit,” said the church leader.

Piraquive explained that discrimination was necessary because it would handicapped pastors in the pulpit would “not sit well” with people.

“There are people that come to the church without an eye…others come without a leg, or with some physical defect…and you cannot name a person like that as a preacher that will rise to the pulpit.”

The Church of God Ministry of Jesus Christ International is strongly linked to the evangelical-based political party MIRA.

Ivan Moreno, brother of Senator Moreno, told magazine Semana that there is no real difference between the church and the political party as they believe in the same principles and political platform.

Senator Moreno helped found the MIRA political party in 2000 with pastor and politician, Carlos Baena.  Baena has since been the president of MIRA while Moreno has served as MIRA’s vice president.

The video of Maria Piraquive came as a surprise to many within the political party MIRA. Baena and Senator Moreno were the two main advocates of Colombia’s main anti-discrimination law, law 1482.  Baena in particular is a known champion of the disadvantaged.

The Church of God Ministry of Jesus Christ International has over 850 temples in 45 countries around the world including the United States and Canada.