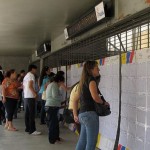 In the wake of the 2014 elections, Colombia has begun implementing enhanced security measures to protect the most at-risk candidates.

The Internal Affairs Minister, Aurelio Iragorri, has announced that new steps — including an intelligence center — are being put into place in order to prevent threat to candidates in the 2014 Congress and presidential elections. 240 people are already reportedly under protection.

“We will give each of the parties a set of measures for distribution to the high-risk candidates,” the Minister stated.

Iragorri added that the information from 56 branches all around the country will be consolidated in the newly implemented CI2E intelligence center, with the aim of avoiding violence towards candidates.

The Colombian government is also planning on mobilizing the armed forces under a Democracy Plan that was also used in the 2010 elections — involving strategies to avoid corruption and disturbances to public order — before the end of the year.