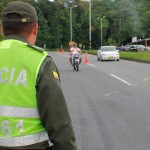 Colombia’s authorities registered a a 7% increase from last year in motor traffic during  recent holiday weekend, but due to the deployment of 70,000 officers, they claimed a 65% drop in motorway accidents, according to local media reports Monday.

According to Vanguardia Liberal, taking into account the thousands of extra miles that were to be traveled over the weekend as Colombians take to the roads to return to work after holiday, the police deployed to the motorways, offering security, mobility and accident prevention measures on all the major highways.

General Rodolfo Palomino, director of the National Police, told El Tiempo that during the police’s “plan of Kings” or “Return Plan” traffic safety operations, there were 114 accidents, nine less than last year.

The number of deaths also dropped, falling from 65 the year before to just 18 in 2014, representing a 65% reduction.

Furthermore, the police registered 66,908 roadside sobriety tests, 629 of which were positives. The number of intoxicated drivers on the road fell 45% compared to the previous year.

The Transit authorities said that the safety precautions would continue until next weekend.