Santos will reveal election decision in less than 11 days 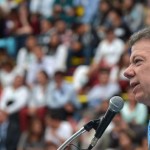 Colombia’s President Juan Manuel Santos has made up his mind about whether or not to run for reelection, and he will make his decision public in the next 11 days, according to a statement he made to national media outlets Thursday.

“In less than 11 days the country will know my decision, I have been heaving and now I practically have it made, but I don’t want to get ahead of myself,” said President Santos.

“An important point is to finish work I have started, and I have put a lot into it but must continue working. For any government official that is motivation.”

The president said he must have working institutional factors in his favor to run, but added that he is constitutionally permitted to seek reelection.

“Going back on the pros and cons, and I am a great believer in the institutions but not autocracy,” said President Santos. “I believe alternation works well for all governments and it’s good to see new faces.”