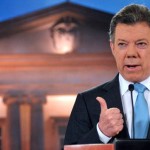 The President of Colombia, Juan Manuel Santos, has sworn to abide by the ruling to be made on Tuesday by the State Council as to whether Bogota’s ex-mayor should be re-instated.  President Juan Manuel Santos said in a statement on Tuesday that if ordered by the State Council to reinstate dismissed Bogota Mayor, Gustavo Petro, he will do so, in order to abide by Constitutional Law.

“If a judicial authority comes and tells me to reinstate Mayor Petro, I will follow their requests and reinstate him, because that is my obligation. That is what I swore to do,” he said.

Colombia’s State Council met on Tuesday to discuss the case of ex-Bogota Mayor, Gustavo Petro who was removed from office and banned for 15 years over supposed “irregularities” that occurred during his attempts to transfer the city’s private garbage collection system into public hands.

Controversy arose when President Santos decided to enforce Petro’s dismissal despite human rights organizations stating that to do so would be in breach of the Mayor’s rights.

However in an interview with Caracol Radio, Santos stated that ”From the first day I started this process I made a decision. I have to act according to the Constitution and the law, every step of the way, so if get a judicial authority ordering the restitution of Gustavo Petro I will do so, because I am bound to do so.”

The appeal submitted last week by Petro was initially supposed to be reviewed by the Administrative Tribunal of Cundinamarca, but that court declared itself incompetent in making a ruling on the former mayor’s case.

Rafael Prado was sworn in as interim mayor after Petro’s dismissal.

The post Santos vows to reinstate dismissed Bogota Mayor if Colombian court orders to do so appeared first on Colombia News | Colombia Reports.