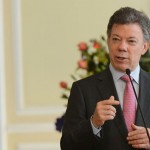 Santos will start his meetings in Spain to discuss peace talks and visa policy with the leader of the Spanish government Marianao Rajoy and to meet with Colombian nationals on the Iberian Peninsula. He will also have lunch with European business leaders as well as meet with the King of Spain.

Later he will travel to Switzerland to participate in an international economic forum. Santos, who will be protagonist in at least four panel discussion, will speak on anti-drug politics, the Pacific Alliance, the importance of Latin America as an investment destination and investment opportunity in Colombia once the armed conflict is ended.

At the event, which will feature many of Europe’s most influential thought and economic leaders, Santos will try to convince the attendees on the importance of investing in Colombia to make the country into a regional leader.