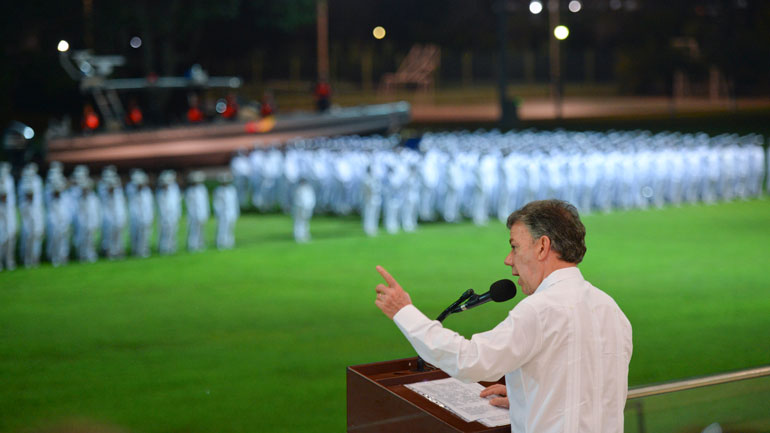 Colombia’s government said Saturday it is suspending aerial bombings of guerrilla camps in a bid to de-escalate fighting and breathe new life into struggling peace talks.

President Juan Manuel Santos made the announcement Saturday night at a military ceremony in Cartagena, saying the confidence-building move was in response to the decision by the Revolutionary Armed Forces of Colombia to declare a unilateral cease fire.

FARC leaders said on July 20 that they were resuming a unilateral truce the rebels had suspended two months earlier following an army bombing of one of their camps that left 26 people dead. That raid in turn followed a series of deadly attacks by the FARC, including a nighttime attack on an army platoon that killed 10 soldiers while they were asleep.

In March, Santos made a similar gamble, banning one of the military’s most-successful tactics in its fight against the rebels in recognition of progress the being made at the peace table.

But since then, mistrust on both sides has grown as fighting has intensified. For the first time since peace talks began nearly three years ago polls show that more Colombians favor a military solution to the conflict than a negotiated settlement.

Reflecting some of the cynicism this time around, Santos said that the ban on aerial bombings could be lifted if the FARC camps pose a risk to civilians or infrastructure targets.

Nonetheless he tried to frame his move as a bid to accelerate talks after both sides agreed to seek a bilateral cease fire in the coming months even before a final peace deal is reached.

The government and the FARC have already reached agreements on land reform, participation in politics for ex-rebels and a joint strategy to curb drug trafficking. They’ve also announced a joint effort to remove unexploded land mines.

But several tough issues remain, the thorniest of which is rebel negotiators’ demand they avoid any jail time for atrocities allegedly committed by troops under their command.