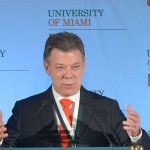 Santos referred to certain critical comments by his predecessor, former President Alvaro Uribe, who has claimed that the negotiations would surrender Colombia to a regional block of leftist governed countries like Venezuela, Cuba or Bolivia.

“Some people are saying that I am surrendering the country to “Castroism” [Fidel Castro; Cuba] or to Chavism [the late Hugo Chavez; Venezuela] or to the FARC! What is that supposed to mean? Who is saying these stupidities?” Santos asked in a speech to US businessmen during a stay in Miami.

Reacting to the reproach, that the peace talks were not “serious” enough, Santos referred to the two generals of the security forces in the government’s delegation, stating that these would guarantee for the “seriousness” needed.

“For the first time in history, we have two generals on the negotiation table, one of them police, the other from the army, probably the two most prestigious generals we had in our history. They are there, they are negotiating. That has given a tremendous seriousness and credibility to the process,” stressed the president.

Santos mentioned that he knew how difficult this path would be, stating that peace is harder to achieve than war.

He assured that he was optimistic about the referendum which would seal the eventual peace deal with the rebel group, saying that “when we have the whole package, I am convinced that the Colombian people will buy it, because they are tired of the violence, they are tired of this conflict.”

Peace talks have recently taken up seeking a solution on the FARC’s involvement in drug trafficking. Earlier this year, tentative agreements were reached over rural land reform and political participation for the rebels in the event of a peace deal.

Colombia’s conflict has been waged for over half a century and has left at least 220,000 dead and 4.5 million displaced.