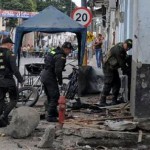 The bomb detonated in the morning in Pradera, located in western Colombia, and has reportedly killed two people and injured more than 56.

“We condemn the vile terrorist act in Pradera…what an irrational and contradictory way of acting on the part of the FARC,” tweeted the head of state.

The official number of deaths and injuries has yet to be confirmed, however the Colombian news agency Semana reported that more than 56 people were injured, including at least three minors. The victims are reportedly a 6-month-old baby, and 7-year-old and a 16-year-old.

Santos has requested that the Colombian Minister of Defense, Juan Carlos Pinzón travels to the the city of Pradera, located in the state of Valle del Cauca, to conduct further investigations.

The 6th Front of the FARC maintains a strong presence in the area, but it has yet to be confirmed if the FARC front is responsible for the bombing.

The incident comes just one day after the FARC ended a month-long unilateral ceasefire.