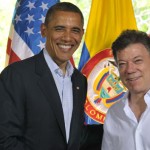 According to the White House, the summit will be about the two countries’ “cooperation on promoting citizen security, respect for human rights, and economic prosperity for all Colombians.”

Santos’ Office said ahead of the 11AM ET meeting that the Colombian head of state would ask his US counterpart for “an alliance for progress and for peace.”

Additionally, Obama is full of praise over Colombia’s “progress in terms of human and labor rights,” the US official said.

According to an official White House press statement, Santos and Obama will be discussing  ”the growing trade relationship we share through the U.S.-Colombia Trade Promotion Agreement.”

In spite the praise, the anonymous White House official said that Santos still has “challenges to overcome” to further improve public security and “violations of the labor code” agreed between the two heads of state in 2012 ahead of the signing of a free trade agreement between Washington and Bogota.

The US has long supported Colombia, one of its strongest allies in South America, in trying to curb rebel-related violence and drug trafficking.

As coca cultivation dropped in Colombia, Obama was forced to cut budget expenses and joint military programs received criticism over severe human rights violations by the Colombian armed forces, the US slowly lowered aid to the South American country and focused increasingly on economic cooperation.