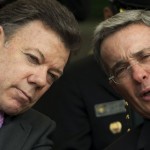 Colombia’s government was aware of an alleged FARC plot to assassinate former President Alvaro Uribe for years prior to the announcement of increased security for the former head of state, according to his successor, President Juan Manuel Santos.

Minister of Defense Juan Carlos Pinzon announced last Tuesday that an attack had been planned against Uribe, and that the government would be taking extra measures to ensure his safety.

But Santos has now expressed that he knew about the plot since at least 2010, when he served as Uribe’s Minster of Defense.

“The government wanted to prevent the situation, warn before any situation so we wouldn’t have to regret anything moving forward. [Uribe’s] security was reinforced–it is already a very, very strong security–for him and other people that were mentioned in this intelligence report, which at this time is an old one,” said the president, in an interview with a regional news station Monday.

Uribe, who initially expressed gratitude to Santos and the government for issuing a security force immediately, attacked Santos after hearing this news Monday.

In an expanded Twitter post published this morning, the former president wrote, “I don’t understand what [Santos] hopes for by saying something contrary to his governments announcement. If his intention is to hide crimes of the FARC to advance toward his ‘impunity agreement,’ he does not need to do it with me.”

This incident is sure to strain already tattered ties between the former president and his successor. The relationship between Uribe and Santos has largely fallen apart due to Santos’ organization and support of peace talks between the government and the FARC.

Uribe ran for president in 2002 on a campaign of war against the guerrillas and his refusal to negotiate with “terrorists,” and has been a staunch critic of the peace talks, along with the other members of his Uribe Democratic Center party.