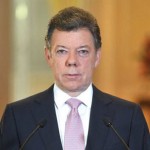 President Juan Manuel Santos expanded his lead in polls leading up to Colombia’s 2014 elections, with 36% of voters in December saying they would vote for him,  compared with 28% in November.

The poll was realized between December 2 and 9, including responses from 1,200 Colombian voters.

Santos comfortably leads the pack of presidential candidates with his nearest competitor Oscar Ivan Zuluaga from Uribe Centro Democratico pulling just 14.2% of voters, maintaining stability from November with only a 0.4% change with respect to the previous month.

Socialist candidate Clara Lopez lowered three points down to 6.2% from 9.3% in December.

However, beating out all presidential candidates, is a “no vote” option with 42.1% of likely voters refusing to cast their votes for any of Colombia’s potential candidates.

In second round of hypothetical run-off elections between Santos and Zuluaga,  Santos would beat Zuluaga with 47.5%  against 23,9%.

Colombians, while the majority are still pessimistic about the direction of the their country, are feeling slightly more optimistic than November with 57.5% saying the country is heading in the wrong direction compared to 67% in the previous month.

Those who think things are going well rose from 26.4% in November to 33.5% in December.

Unemployment is the principal concern of Colombians, followed by health and corruption.

Achieving peace with the guerrilla FARC occupies 4th place, with 8.4% of voters ranking it as the country’s most important issue.

Santos’ disfavorable image lowered as well during the month, as 50.2% of voters saw the president unfavorably, compared to 58.3% in November.