Santos assures Colombian military that FARC will not be granted impunity 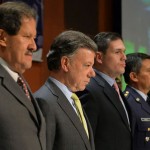 Colombia President Juan Manuel Santos assured members of the military on Tuesday that ongoing peace talks with rebel group FARC will not result in impunity for the guerrillas.

Instead, Santos told an audience of his country’s top military commanders in Bogota that this process will be the first to apply transitional justice that recognizes the rights of victims.

“There will not be what many say there will be: absolute impunity. This is not going to happen. Nobody has talked about impunity in this process,”  said Santos.

MORE: We will not go to prison: FARC Secretariat

Apart from the negotiators’ alleged lack of interest in securing a full amnesty for FARC guerrillas, international law to which Colombia is bound impedes impunity for those who have committed war crimes or have violated international humanitarian law, said Santos.

According to the president, “we are allowed none of what we are accused to be offering, total impunity. There will be no total impunity what there will be is transitional justice,” which in past peace processes around the world has granted benefits to leniency to fighters as a means to convince to reintegrate into society.

These same benefits and leniency will be granted to the military, which is currently also being investigated for atrocities committed in the course of the almost 50-year old conflict.

“I will not allow, and nobody will allow that there will be a situation in which there are some members of the military accused and condemned to 40 years [in prison] and the opposite side free and doing what it pleases. This is not going to happen,” promised Santos.

The president has been trying to get a bill passed that allows military tribunals to prosecute and judge members of the institution who are suspected of having committed crimes. Two attempts to do this this have already failed; The first attempt failed as the government was forced to remove the military justice reform from an all-round justice reform bill over international pressure. The second bill was revoked by the Constitutional Court which ruled the ratified military justice reform bill had fraudulently been pushed through Congress.

Santos’ administration has been engaged in formal peace talks with the FARC since November last year. If successful, the negotiations will end an armed conflict that has killed more than 220,000 Colombians.

The post Santos assures Colombian military that FARC will not be granted impunity appeared first on Colombia News | Colombia Reports.