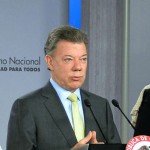 Colombia President Juan Manuel Santos announced Tuesday that two women will be joining negotiators for the government in ongoing peace talks with the counrty’s largest rebel group the FARC in Havana, Cuba.

“The women, like all of the negotiators, are named – for more than represent a particular groups – for their merits and positive support that they give the process, as I am sure will occur,” said President Juan Manuel Santos.

For Paulina, Santos praised her work in humans rights, working to substitute illicit cultivation, and on victims, land issues surrounding the armed conflict.

Santos said Renteria would be responsible for coordinating with victims groups in Bogota and ensuring representation of their concerns in Havana, Cuba.

“Renteria will be coming and going from Bogota to create an appropriate channel of communication with women’s organizations that have so much to offer, for among other reasons, more than half the victims are women,” said Santos.

In conclusion President Santos extended a “welcome” and reiterated his support for the negotiators attempt “to end the conflict and reach peace.”