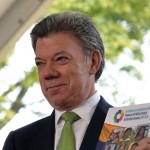 President Santos formally apologized to the San Jose de Apartado peace community on Tuesday, recognizing that the battered community in northern Colombia had been unjustly stigmatized by the state.

The president had been obligated to apologize by the Constitutional Court over comments made by his predecessor, former President Alvaro Uribe, who had accused members of the peace community to obstruct justice.

The San Apartado peace community declared itself neutral in the conflict and has since been victim to violent actions by guerrillas, paramilitary groups and the military alike. Its efforts to remove itself from the armed conflict have been hailed by international government and non-government organizations alike.

Santos said that he recognizes the “brave” efforts of the peace community to defend human rights after it declared its neutrality in the country’s armed conflict about 16 years ago.

“I recognize the peace community of San José de Apartado as a brave defender of the [human] rights of all Colombians. Despite having experienced the armed conflict firsthand, [the community] has persisted in its efforts to achieve peace in the country,” the president said.

Furthermore he asked forgiveness for unjustified claims the state made about the peace community several years ago, after the Constitutional Court ordered the government to take these back.

He officially revoked these claims in the name of the state, indicating that he disagrees with the stigmatization of those who seek peace and reject violence.

“So I ask forgiveness and do it with the certainty that forgiveness is a condition of peace,” he was quoted saying in the notification.

Residents of San Jose de Apartado, Antioquia, in north-west Colombia, declared themselves a neutral “peace community” in 1997 in an attempt to resist being drawn into Colombia’s armed conflict. They were placed under the protection of the Inter-American Commission on Human Rights. The community has been defiantly trying to stay on their land despite ongoing battles between security forces, guerrillas, and neo-paramilitaries for the past 16 years.