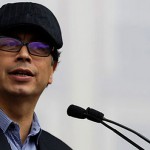 Colombia President Juan Manuel Santos and the recently ousted Bogota mayor Gustavo Petro met on Tuesday night to discuss the hotly debated decision by the Colombian Inspector General to ban the mayor from public office for the next 15 years.

At the meeting, Santos reaffirmed that although the Colombian government will not become legally involved in the dispute, the mayor is free to appeal to international courts of justice against what Petro qualified as an “abuse of power” on behalf of the disciplinary institution.

“The National Government does not have any animosity towards the mayor resorting to the workings of international justice,” the President stated.

Petro will most certainly be acting on this initiative and arrived in Washington D.C. on Wednesday morning to appeal to the Inter-American Court for Human Rights, whose laws he believes should and will be respected by the Colombian government.

“We have neither requested the president’s support nor lack of it, he have asked him that … the decisions made by conventional justice be obeyed by the Colombian state in its entirety,” Petro stated from the steps of the presidential palace following the meeting.

“We are summoned to follow the laws and international treaties which we have signed,” Petro added.

The government is taking an objective stance on the notoriously controversial issue which has caused deep friction between the Offices of the Inspector General and the Attorney General, with the President claiming that the duty of the government is to democracy and thus respecting the independence of public institutions.

“I’m not going to take sides,” Santos told W Radio only hours before the meeting. “The decisions of the control and justice organizations are respected by the government. We cannot oppose nor refuse to comply.”

Speaking on behalf of the Colombian state, on Tuesday the Minister of Justice equally assured that Santos was willing to comply with the verdict of higher institutions.

“The President will respect the distinct decisions made in these judicial proceedings,” Minister Alfonso Gomez Mendez stated in a press conference on Tuesday. “He neither supports nor validates the decision of the Inspector General’s Office, but he will abide to the legal system outlined by the Constitution, by law and by the decisions of the Constitutional Court.”

The ex-guerrilla, who assumed power over Bogota in 2011, was unexpectedly relieved of his duties by the Inspector General Alejandro Ordoñez on December 9 following “irregularities” in a reform of the city’s waste collection, in what Petro powerfully tweeted as being a “coup d’etat.”

On Tuesday the mayor reiterated his resolve against what he had previously described as the “fascism” of the authorities, declaring that he will not stand back and accept resolutions that “violate internal and conventional rights” and will fight until the bitter end.

“In a few years’ time, we will no longer be able to repair the damage done to the 732,000 citizens who legitimately and democratically decided that this government rule over Bogota,” Petro announced.

President Santos on Friday met with both Ordoñez and Attorney General Eduardo Montealegre, with the latter disqualifying the move by the Inspector General.

The dispute culminated earlier last week as the Inspector General Ordoñez declared Petro dismissed of public office for the next 15 years under the accusation of making a decision that left 6,000 to 9,000 tons of uncollected garbage on the streets of the capital in December last year.

Following the announcement, Petro summoned tens of thousands of supporters to Bogota’s central square to rally in a “democratic and peaceful revolution.”

Petro’s clashes with the Inspector General date back earlier, however, as the ex-militant with the urban guerrilla group M-19’s leftist political views have often come up against what he called Ordoñez’s “intolerance based on extreme religious convictions.”

Ordoñez’s at times radically conservative stance is what Petro has claimed drove the Inspector General to finally expel him from power.