Santos: 156 top Colombia drug traffickers extradited to US in 2013 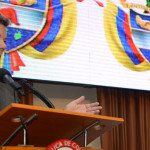 Colombia President Juan Manuel Santos took to his Twitter account once again on Monday, this time to highlight 156 extraditions mostly to the United States of drug traffickers during 2013.

The President also pointed out the 91,610 arrests made during the year in connection with international and domestic drug trafficking, including “micro-trafficking.”

Police also seized 77 tons of cocaine and 382 tons of marijuana during 2013, according to Tweets released by the President.