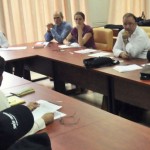 Peace talks between Colombia’s government and FARC rebels will not resume on Monday as planned, but instead will continue on November 28, the two delegations announced Sunday.

“The delegations of the National Government and of the FARC-EP at the conversations table have decided to postpone the beginning of the next round of talks until Thursday November 28,”  the delegations said in a press release.

The new round of talks will not be about the “End of the conflict,” the third point on the agenda as initially agreed, but will talk about the “Solution to the problem of illicit drugs,” originally the fourth point of the agenda.

The delay is supposed to “refine visions, exchange documents and analyze the various proposals that were received from different sectors of society,” the delegations said in the two-paragraph statement.

The delegations will receive more feedback on drugs from forums organized by the United Nations and the National University’s think tank.

The FARC have long used drug trafficking to finance the guerrilla organization and its operations and will have to find a way to cut ties with the illegal income in order for it to become a non-violent political movement as agreed to in the last round of talks.

If successful, the negotiations will end nearly half a century of war between the Marxist rebels and the state.