(AFP) – For 10 years, Alvaro Perez was a tailor of war, making uniforms for the Revolutionary Armed Forces of Colombia. Now, as the rebels start a peace dialogue, he is living change: sewing school uniforms.

“The greatest message I have is that working can bring about peace too,” Perez told AFP amid the din of sewing machines on the first floor of a nondescript brick warehouse in a poor neighborhood in southern Bogota. 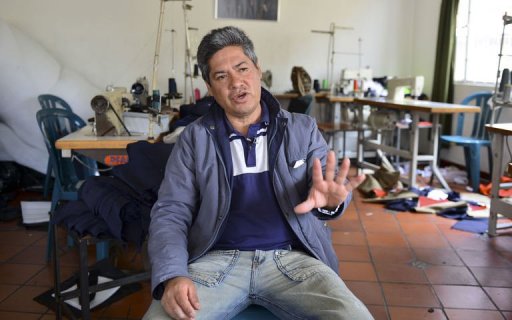 The move by the FARC, which has been battling to take over the government in Bogota for half a century in the region’s longest-running insurgency, raised hopes that an ever-elusive peace deal could finally be at hand.

Perez, an upbeat man of 53 with salt-and-pepper hair who has traded the olive drab of rebel fatigues for the blue promise of kids’ school uniforms, knows how instructive his personal story might be.

A sign hanging over the workshop of his small tailoring company reads proudly: “The hands that are making these products once upon a time carried a weapon. This is what these hands are making for Colombia today.”

While most of the uniforms are for schools, Perez — who makes a point of hiring former rebels like himself — also puts together work uniforms for restaurants, as well as for companies like Coca Cola distributors.

“The biggest contribution you can make to peace is working and creating jobs. Because so many people who come out of the guerrillas went there in the first place because they had no opportunities and were poor,” explained Perez, who joined the FARC back in 1996.

“It seemed just to me. Because I saw that the rebels were taking things away from rich people and helping the poorer people,” he recalled.

Perez lived for years in jungle camps, sewing camouflage caps, trousers and other garments for the insurgents.

While not a frontline fighter himself, he has plenty of memories of seeing his fatigues become bloodied as soldiers got killed.

I remember “being in the middle of the fighting, crossfire, scrambling to hide, helping people, but not fighting myself.”

Perez began to become dispirited when the rebels told him he would not be paid a salary for his work.

“They told me: ‘hey, nobody is getting paid here. People are working for a cause here,'” he said.

His disenchantment grew much deeper when he witnessed the executions of farmers who would not cooperate with the rebels.

“They would just put three bullets in each one’s head. And dump them in the river,” he remembered.

“Becoming accepted is really difficult, because if they know you are a former guerrilla, at first everybody closes every door,” he told AFP. “Banks for example, don’t want to give you a loan.”

But Perez has been one of the luckier ones.

In 2006, he qualified for a government program for former rebels and got a small loan to launch his own sewing enterprise Colfepaz. Through hard work and determination, he has grown the business to a staff of 40 people.

Initially, Perez said, neighbors complained that a former rebel was in the building, fearing somebody might bomb the warehouse.

A former rebel working at Colfepaz, Luz Marina Zarate, saw a tough road ahead for the guerrillas even if the peace talks succeed.

“It’s going to be hard for a lot of rebels, getting used to taking orders in a business,” she ventured.