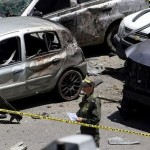 Rebel attacks on civilian targets and security forces in Colombia dropped 46% in the first nine months of 2013 compared to the same period last year, statistics provided by the country’s Defense Ministry show.

According to the ministry’s Strategic Studies report, attacks by illegal armed groups like the FARC and ELN on towns and security forces dropped from 141 in the first nine months of 2013 to 76 in the same period this year.

Acts of terrorism which include attacks on infrastructure dropped 15% from 715 in the first months of 2012 to 607 in the same period this year.

The number of attacks against the oil industry did go up in 2013. According to the ministry’s statistics, there were 147 attacks on oil pipelines, 18% more than last year.

Attacks on bridges and roads dropped drastically however, with 40% and 53% respectively.

The apparent drop in rebel attacks coincides with the FARC holding peace talks with the administration of Juan Manuel Santos. These talks began in November last year.