Ráquira: the pottery capital of Colombia 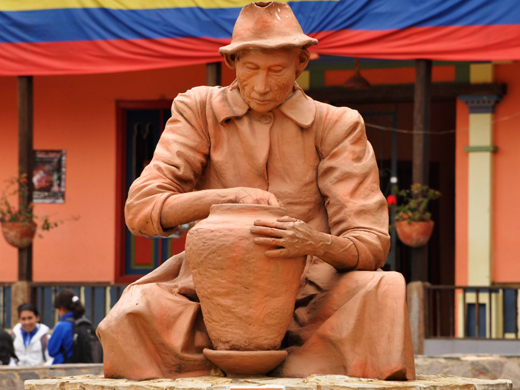 A sculpture is displayed in the main park of Ráquira, or “City of Pots” in the Chibcha language. The economy of the city of 13,000 residents in the mountains of Colombia has been based on the pottery trade since pre-Colombian times. (Juan Carlos Rocha for Infosurhoy.com)

RÁQUIRA, Colombia – A mix of mud and water is skillfully manipulated and transformed into pottery in the hands of Armando Molina Rodrigues.

As an owner of a small pottery factory in the city of Ráquira, in the department of Boyacá, Molina, 40, would be just another of the city’s many potters it not for his compelling history.

After he became blind eight years ago, pottery became a way for this small business owner to continue making a living.

In 2004, Molina was the manager of the city’s largest pottery factory when he completely lost his vision due to a detached retina.

That same year, his wife left him and he lost his job.

Molina subsequently received help from Rómulo Zuluaga, 52, the most experienced employee in the factory he had once managed.

“I went to his house and started to tell him that he could overcome the ordeal he was living through,” said Zuluaga, whose parents also were potters. “I taught him how to work with ceramics, how to sculpt clay.”

Molina learned so much from Zuluaga that he said his friend has “eyes in his hands.”

In order to start over with his new trade, he relied on the contacts he had made during the 20 years at his old job and invested his savings to open his own factory.

Molina produces an average of 800,000 pieces per month. The pieces are sold in other Colombian cities, such as Medellín, Cali and Bogotá – and even in Israel.

“After I became blind, I learned that failure is all in your mind,” he said. “When we want something and fight for it, we can overcome any obstacle.”

Molina takes part in all of the production stages at the small factory, which employs four people, as well as his 15-year-old son, Edson Molina.

His son left school to work alongside his father, but Molina said he would like to see him return to his studies.

The young boy is constantly beside his father, serving as his eyes, guiding him wherever he wants to go.

“I like to work and I want to stay close to my father,” he said.

Pottery as a way of life

Pottery and coal mining are the main sources of income in Ráquira, which is located 171 kilometer (106 miles) from Bogotá.

Most pottery factories are family-run, with approximately 700 families working in the trade, according to local officials.

Pottery production, the crafts trade and tourism have created more than 5,500 jobs, which equates to about 44% of the city’s 13,000 population.

“This is our tradition – everyone here either works [in crafts] or has a relative who does something related to crafts,” said Liliana Cerrero, a 26-year-old saleswoman at a store in downtown Ráquira, where she has worked for three years.

Ráquira’s pottery industry dates to the pre-colonial period. Even the city’s name has pre-Colombian roots. In the Chibcha language (spoken by the indigenous peoples who inhabited the region prior to Spanish colonization), Ráquira means “The City of Pots” (Ciudad de las Ollas).

Upon encountering the indigenous who made utensils out of clay, colonizers passing through the region in 1537 named them the “Potter People.”

The city was officially founded on Oct. 18, 1580 by Friar Francisco de Orejuela, and the tradition ever since has been passed down through generations.

“You don’t make a lot of money in ceramics and you never will. But it’s what we know how to do,” Forero said while casting a piece, even with an injured hand. “The prices they pay for our products are low. It’s the intermediaries who earn money, the people who buy from us and then resell our products.”

From the factories to the store shelves – located only blocks away from each other – the prices increase three times.

Ráquira, which is an important part of Colombia’s cultural history, suffers from a lack of resources, as 60.22% of the population lives in extreme poverty, according to the most recent census by Colombia’s National Administrative Department of Statistics (DANE).

“Ráquira depends on its coal mines and its crafts, but both activities are in decline,” said Mayor José Hernán Sierra Buitrago, of the Cambio Radical party.

Sierra Buitrago said his administration is studying alternatives to provide training and improve the income of its craftsmen. The creation of cooperatives also is being analyzed.

“We know that the intermediaries are earning more money,” he said. “We’re studying how to help the families that produce the ceramics increase their income.”

Without job-training programs and incentives for young people to stay in school, the city has a truancy rate. But that’s also a cultural issue, Buitrago adds.

“The children of potters want to learn the trade. They want to work with clay and use the potter’s wheel,” he said. “It’s part of the culture.”

However, some younger people said they would trade the factory for the classroom.

“I’d rather be studying, but I had to start working in order to help my family,” said Leonardo Noa, a 15-year-old who left school when he was 12 after completing the fifth grade.