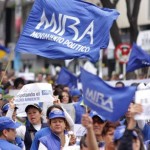 Colombian political party MIRA is under investigation by the prosecutor general’s office as to whether its’ assets abroad were obtained in accordance with international law.Prosecutor General Eduardo Montealegre confirmed on Monday that MIRA’s relationship with the Christian Church of God Ministry of Jesus Christ International, an evangelical church owned by the same family that founded MIRA, is being investigated.

The prosecutor’s office is looking into whether allegations of money laundering and illicit enrichment occurred between the political party and the church.  ”Mira” is suspected of syphoning parishioner finances from the church for political funding.

A pastor for the church, Maria Luisa Piraquive, is to be questioned on February 12th on allegations of money laundering.   A senator for the “Mira” party, Carlos Alberto Baena Lopez will also be questioned on the same date on allegations of money laundering and illicit enrichment.  They are both under scrutiny about inconsistencies concerning the the financial information declared to the national tax office from 2003-2006.

“Mira” has protested that the accusations are politically motivated.  Colombian congressional elections are to be held on March 9th next month.

“Mira” was investigated in 2008 on allegations of receiving funding from a drug trafficker in the United States but the investigation was shelved in 2010 due to a lack of evidence.  There remains a possibility that the case will be reopened.