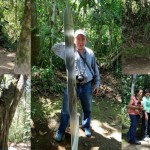 The statues in a popular tourist park in southwestern Colombia were replaced by cardboard cutout copies after a conflict of interests broke out between Colombia’s culture ministry and the local community.

Tourists visiting the popular Archaeological Park of the San Agustin municipality in the mountain area of the Huila department, south-western Colombia, during the last month have been in for a big surprise.

Most of the famous pre-Columbian statues, the park’s main attraction, are gone, replaced by cardboard copies displaying photos of the original statues which were recognized as world’s cultural and natural heritage by the UNESCO in 1995.

The cardboard copies have become a popular object for visitors ironically posing with them, some of them having complained in social media forums that seeing these copies would hardly be worth the entrance of about 10 dollars, according to local newspaper Tusemanario.

The same newspaper reported that as a response to the rising dissatisfaction of the park’s visitors, representatives of the local touristic industry claimed that the missing statues would start to harm their business.

Some tourist uploaded their photos with the cardboard copies on the Tusemanario’s webpage displaying a note stating the following: “I’m in the exhibition ‘The Return of the Idols’ in the National Museum of Bogotá. I will be back in March 2014.”

While this would be a satisfying justification of the missing statues, as archaeological collections tend to be borrowed to other cultural sites and exhibitions, this statement is not accurate since they are not to be found in the National Museum of Bogota, either.

Conflict between Ministry of Culture and San Agustin community

The contradiction arise from 2011 when the culture ministry’s Institute of Anthropology and History (ICANH) and the National Museum of Bogota started to plan the “The Return of the Idols” exhibition, according to national newspaper El Pais.

This exhibition was supposed to bring 20 of the pre-Columbian statues to the National Museum of Bogota honoring the 100 year anniversary of the statues’ discovery by German ethnologist Konrad Theodor Preuss.

The ministry’s institute claimed in a notification released on November 12, 2013, that the authorities planned the exhibition according “to all national and international guidelines” and in “dialogue” with the local San Agustin community, especially with representatives of the Yanacona indigenous community.

The Yanacona indigenous community has inhabited the area of the Huila department since before the Spanish colonization and regards the pre-Columbian statues as scared elements of their cultural and religious heritage.

Apparently not all members of the local community felt involved in the dialogue, as fierce resistance began when the official team of scientists prepared the transfer of the statues from San Agustin to Colombia’s capital in early November.

Protesters reportedly blocked the access to the park, threw stones and burned the team’s equipment, according to the ministry’s press release, in what the notification called an act of “sabotage, opposing the national government.”

On the other hand,  the Committee for Defending the Cultural Heritage of San Agustin, which claims to represent 17 of the resisting social movements and the Yanacona indigenous community, justified the protesters’ actions as a defense against the ministry’s “centralist, arrogant and  authoritarian decisions,” as stated in a notification on November 12, 2013.

Apart from the claim of not having been sufficiently informed about the planning process, the committee also stated that the local community feared for the statues to be damaged by unprofessional handling. This fear was fuelled by the appearance of reportedly fake images in social media platforms of the statues being damaged during packaging, according to El Pais.

“The statues are not only sacred relicts of the Yanacona indigenous culture, but also crucial elements of the cultural heritage of the San Agustin community and Huila region which should stay in their historical environment,” the protest committee stated in their notification.

After these incidents, the ministry cancelled the whole project, stating that “culture should never be harmed by violence.”

While the protest committee celebrated this as a victory of “the authority of the people” and “participatory democracy,” the National Museum of Bogota had to change the name of the exhibition from “Return of the Idols” to “The Silence of the Idols.”

Deprived of its planned exhibition pieces, the museum now shows the empty spaces where the statues were supposed to stand, accompanied by sounds and projections of the park’s forest surrounding the statues in an ongoing exhibition which will be shown until February 28, 2014.

According the director of the Bogota’s National Museum, “the exhibition did not arrive, because there were people who opposed it. We have to ask ourselves if this is as legitimate opposition. Our opinion is that the National Museum is a museum for all Colombians, where we facilitate the encounter between people and their heritage,” as quoted by El Pais.

While the question remains over whether the pre-Columbian statues belong to the cultural heritage of all Colombian people or the local community of San Agustin, the ICANH reports that the statues are currently being restored in San Agustin and will bereturned to their former places in March 2014.