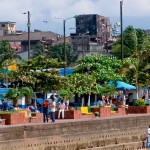 Buenaventura, located on the Pacific coast in the western state of Valle del Cauca, went over two days without electricity due to a “terrorist attack” authorities attributed to the FARC, Colombia’s oldest rebel organization.

The blackout started Tuesday when the city’s central electrical tower was damaged in an explosion reportedly caused by a makeshift bomb.

The city’s roughly 350,000 residents were put on an extended curfew by the Buenaventura Mayor’s Office while military personnel secured a perimeter around the electrical tower so that repair crews could operate safely.

Buenaventura, which accounts for some 60% of Colombia’s registered imports and exports, is also one of the primary shipping points for illicit drugs.

The FARC is only one of a number of illegal organizations believed to be active in and around the port city, which has unemployment rates of almost 60% and extensive problems with crime and homelessness, according to the city’s Chamber of Commerce.

It’s unclear whether the attacks had any serious impacts on regional or national commerce, and as of yet, no group has taken responsibility for the alleged attack.

Infrastructure has been a traditional target of the FARC and other rebel groups, and recently, Colombia’s second largest guerrilla organization, the ELN, launched an offensive in various parts of the country against oil and gas pipelines and electrical towers.

The FARC is currently engaged in ongoing peace talks with the Colombian government in Havana. However, no ceasefire agreement is currently in place between the two parties, and attacks from both sides have continued in the year since the start of formal negotiations.