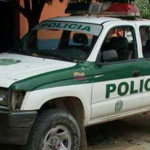 Colombian police have captured the nephew and sister of the notorious Dario Antonio Usuga, leader of the country’s largest neo-paramilitary group “Los Urabeños.”

The nephew, Arley Usuga Torres, was captured in the northwestern Colombian town of Turbo, Antioquia, along with eight other alleged members of the Urabeños gang, reported Caracol Radio.

Authorities reported that the gang was transporting cocaine to Central America in coordination with the Mexican mafia.

The United States has issued an extradition request for Usuga Torres on charges of drug trafficking.

In the operation that led to the captivity of the Urabeños leader’s sister, Nini Johana, the police also seized a large sum of cash, reported Colombia’s El Espectador newspaper.

According to local media, the detainee will  face charges of storing drug money for the criminal organization.

The U.S. Department of State is currently offering a $5 million reward for information leading to the arrest of Dario Antonio Usuga.