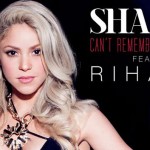 In anticipation of the release of her eighth album set to debut on March 25, Shakira premiered the single, “Can’t Remember To Forget You,” featuring Rihanna on Monday.

Shakira said she feels “privileged” to have worked with Rihanna in an interview with Glamour Magazine.

“[W]orking with [Rihanna] was utopia. She’s the sexiest woman on the planet. And at the end of the day, we’re both just basically Caribbean girls. The chemistry was so good and so real. She taught me dance moves. She was a sweet teacher,” the Barranquilla-native told Glamour.

A video accompanying “Can’t Remember To Forget You,” directed by renowned music video director Joseph Kahn, is expected to be released shortly as well.

With a scheduled release date of March 25, the album will be her eighth studio project and the first to feature electronic music.

Rihanna, the 25-year-old six-time Grammy winner, was named the fourth most powerful celebrity in 2012 by Forbes Magazine, and also appeared on TIME’s 100 Most Influential People in the World that same year.