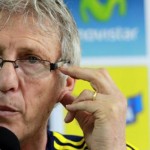 Colombia national soccer team head coach Jose Peckerman told local media that maintaining the high level of the players is of tantamount importance during analysis that followed Colombia’s 0-0 tie in the exhibition match against the Netherlands.

“The Dutch style of playing favored Colombia,” said Peckerman. “We must now draw conclusions from the two games we had to face.”

Peckerman also pointed out the performance of Victor Ibarbo who scored one of the two goals against Belgium in Colombia’s 2-0 victory over the European country.

“We must maintain a high level from all our players,” said Peckerman.

In March 2014, Colombia will return for another round of exhibition matches before heading to the FIFA 2014 World Cup in Brazil.