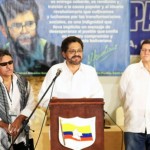 As peace talks recommenced in Havana Monday for the first session of 2014, Colombia’s FARC rebel group renewed demands for the formation of a “Constituent Council for Peace” and called for protest “abstention votes” to be made available in the event a future peace deal is put to popular referendum.

“We invite Colombians, in their social and political organizations, the thoughtful people, to find alternatives that strengthen us as a nation, and we suggest continuing to push for the Constituent Assembly of Peace,” said Luciano Marin, alias ‘Ivan Marquez,’ a spokesman for Colombia’s largest rebel group.

According to local media Terra, the FARC’s proposal involves convening a group assembly, composed of Colombia’s major political powers, that would serve as “an elevated expression of social participation” in the construction of a final peace agreement.

At the president’s urging, Congress last year passed legislation that would put the final terms of any peace deal reached during negotiations to a popular vote by the Colombian people.

The FARC has opposed the “yes” or “no” vote option, saying it will give Santos too many options to issue decrees. Marquez called on voters in upcoming elections to place an “abstention vote.”

In regards to the current discussion topic — solutions to problems with drug trafficking and cultivation — the third point in a six-point peace agenda, Marquez asked that the farmers not be the first sacrificed in favor of the “corrupt,” who Marquez accused of propagating the illicit trade.

“Behind bars with the drug bosses, should not be the farmers or the ‘mules,’ a problematic social expression, but rather the corrupt bankers who use embezzled money from drug smuggling to stimulate their existence,” said Marquez.

Delegates of the administration of President Juan Manuel Santos have been talking to rebel negotiators since November, 2012, to negotiate an end to 50-years of armed conflict between the FARC and the Colombian government.