Peace or Appeasement in Colombia? 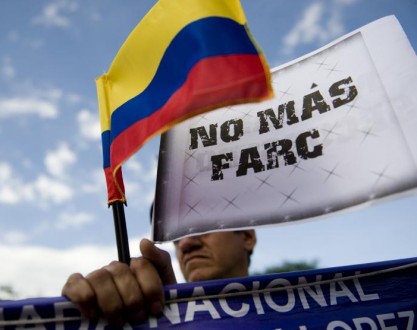 By agreeing to negotiate with FARC, Colombia’s Juan Manuel Santos is simply allowing the continuation of war by means of politics

The last time Colombia’s government sat down to negotiate peace with the Colombian Revolutionary Armed Forces (FARC in Spanish), the regime conceded a territory the size of Switzerland for the guerrillas to rule. Last week’s announcement that Colombia’s president, Juan Manual Santos, was prepared to negotiate peace with the guerrillas has raised more questions than answers. As much as Colombians desire peace many are wary of this process given their own history.

In the mid 1980s, the Betancourt government engaged FARC in peace talks and as a result the Patriotic Union (UP) was allowed to function as legal representative of the guerrilla movement. Unfortunately, the drug lords and paramilitaries declared open season on the UP leaders even as these began to distance themselves from the FARC’s military wing.

During the last peace talks (1999-2002) former President Andres Pastraña ceded FARC a safe haven in an effort to promote talks. As negotiations dragged on for three long years, FARC built a virtual state-within-a-state complete with guerrilla training camps, 25 airstrips to fly narcotic shipments, and prison camps to hold its hostages.

As the oldest active guerrilla insurgency in the Americas, the FARC funds itself by kidnapping for ransom and the production and worldwide distribution of narcotics. Indeed, FARC’s operations make them one of the world’s largest armed drug cartels. While long classified as a terrorist organization by the United States, Canada, the European Union and a host of other countries, its supporters such as Hugo Chavez and his allies in Ecuador, Bolivia and Nicaragua, have worked to have FARC recognized as a belligerent force in an armed conflict.

FARC on the Ropes
In the last decade the guerrillas have been dealt significant blows as Colombia’s armed forces decapitated FARC’s senior leadership. Amnesty has brought many guerrillas back from the jungles. Public opinion rejects FARC’s use of torture and inhumane treatment of hostages in its jungle prisons, most notably after the military rescued former presidential candidate Ingrid Betancourt. Reportedly, FARC’s numbers have dwindled to between 5000 and 8000 armed members, although an underground movement still exists in urban areas.

Despite these defeats, in 2011 FARC increased its use of bombings, extortion, bank robberies, and land mines. With close to 2000 incidents of FARC activity, this is the highest figure since 1998.

Its use of violence against Colombia’s indigenous people, recruitment of child combatants, abduction and execution of civilians without due process, and sexual abuse of combatants and hostages, have discredited FARC’s image beyond repair.

Since coming to power, Santos has reversed Uribe’s uncompromising policy towards both FARC and Venezuela’s Chavez. During his eight years in office, Uribe pressed matters by militarily defeating FARC and warning Venezuela that Colombia’s vastly superior armed forces would not tolerate interference from across the border. Colombia’s military even crossed into Ecuador to bomb a FARC base. Uribe was under no illusion when it came to FARC and Chavez. His objective was to end FARC’s threat and to check Chavez’s aspirations.

Santos, much to his supporters’ dismay, has smoothed over disagreements with Chavez and now seeks negotiations with a weakened insurgency turned drug dealer that is trying to regenerate itself through a political process. Critics point out that what FARC was unable to achieve through military means, namely legitimacy, is being handed to them through peace talks.

Chavez’s Peace Dividend
The peace talks play into Chavez’s hands as he faces an election in October against a united opposition. An ally of FARC, Chavez’s re-election becomes seemingly indispensable to the success of any peace process. Santos must calculate that only Chavez can keep the guerrillas at the table. For his part, Chavez will have allies, once down for the count, getting a foothold next-door in Colombia.

By sponsoring the negotiations, Venezuela projects itself into Colombia’s internal affairs. Clearly, Chavez could not defeat Colombia as a bulwark against narco-trafficking and an ally of the United States through conventional means, but he has managed to use both state and non-state actors to secure his position in the region. In the meantime, Colombia’s government sees its interests tied to a Chavez victory in the upcoming elections.

In a twist on the axiom made memorable by Carl von Clausewitz, Lenin explained that politics is war by other means. Given FARC’s failure to defeat the Colombian government militarily for half a century, it now seems possible they will gain legitimacy and access to power by means of politically-inspired peace talks. This time, if the past is any indicator, the territory they will occupy may well surpass the size of Switzerland.

By Fernando Menéndez, an economist and principal of Cordoba Group International LLC.