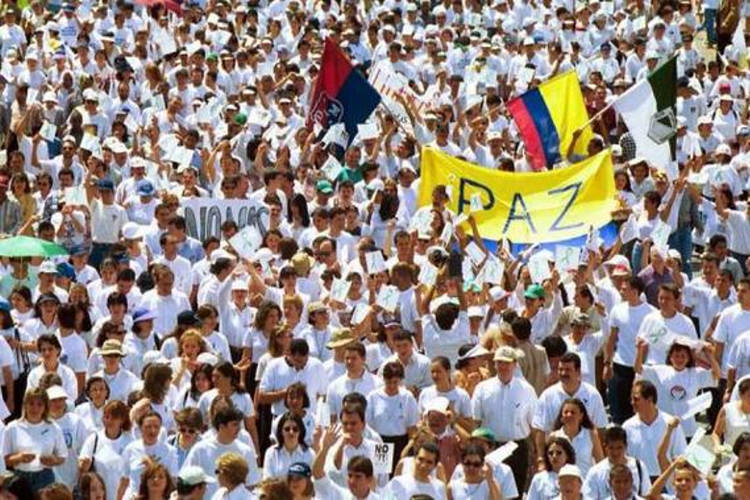 By Martin Santos, Huffington Post – It’s heartbreaking to say that I’ve NEVER lived a single day were there was peace in my home country of Colombia.  The dreadful ongoing armed conflict with the FARC and ELN guerrillas has lasted for over 53 years and has left its mark in terrifying ways: According to a recent study, approximately 5.5 million victims overall, 2,683,335 are of which women and 1,163,218 are children under 12, have been affected in some way by this war.

Setting aside Nazi-era Germany, no other country in the world has experienced a similar number of victims due to conflict. To name just a few other figures, 11.5 percent of the Colombian population has somehow been affected by the armed conflict; 4,751,371 people have been displaced; 16,123 kidnaps have occurred between 1996 and 2012; and, in the last 10 years, 15,395 acts of terrorism have been committed.

Despite all these figures, the Colombian government has sought to achieve peace and an end to this war that has caused so many tears and blood to our communities by negotiating with the armed group. In September 2012, the president announced peace dialogues that are currently taking place in Havana, Cuba. With the assistance of guarantor countries Cuba and Norway and facilitator countries Venezuela and Chile, the government’s delegations and the FARC are sitting down together to discuss a negotiated solution to conflict. Renowned politicians, policy makers and former generals of the Colombian army, including the celebrated General Oscar Naranjo, comprise the government’s delegation that is widely popular due to their well-distinguished capacities and achievements. The FARC have included their highest-ranking militants and directors part of their delegation. This means that the issues are being addressed with the greatest responsibility, delicacy and seriousness to see if once and for all, the Colombian people can end this disastrous war that has profoundly harmed our society.

In addition to hope that this process results in a happy ending, the international community has also supported this initiative. Just to mention a few: “The Elders,” a group of distinguished international leaders such as Kofi Annan, Nelson Mandela, Desmond Tutu, former U.S. president Jimmy Carter and former president of Brazil Fernando Henrique Cardoso, have all signed a letter that states the following:

“The Elders have followed with interest and admiration the President’s persistent efforts since taking office to end the civil wars that have plagued Colombia for half a century, wars that have unfortunately undermined the country’s ability to exploit its natural wealth and address the deeply entrenched problems of poverty and inequality in development.”

President Barack Obama, Pope Francis, former guerrilla member and now president of Uruguay Jose Mujíca, and UN Secretary General Ban Ki-moon are several more on the long list of supporters. The fact that this peace process has unquestionable approval is meaningful in the sense that the international community has given validity to the conversations currently going on in Cuba.

As negotiations continue, people’s patience is staring to come to an end. A year has gone by since the process began and Colombians are demanding quick results. Patience is becoming scarce and skepticism is rising as polls indicate that people are losing hope as time goes by. A bilateral ceasefire has not been complied with since the government doesn’t want to resign to military pressure in case the negotiation is unsuccessful. The FARC won’t increase its militants nor they will spread their presence around more territories if the process fails.

This has happened before in previous occasions, so Colombians will not forgive the government if this were to occur once again. Due to this dynamic, both parties are discussing a viable way out in Cuba while simultaneously striking each other militarily. People ask themselves “How is it that guerrillas are willing to negotiate a end to the conflict but continue to harm Colombia with terrorist attacks?” The question is understandable, but it seems we’re forgetting that this conflict has been around for more than half a century and that it’s unrealistic to expect it to end smoothly in just a few months. No one is going to surrender so easily and that the FARC bluffs by appearing confident and strong through disproportionate requests only complicates matters. But, like in poker, the bluffer knows they have the losing hand.

This circumstance is comprehensible but those who are skeptical might not have realized yet that this is possibly the last opportunity for the eternal war to end. Despite the obvious and predictable bumps in the road and delay in conversations, the progress that has occurred is unprecedented in the history of our nation. Of the five negotiation points, the two most contentious ones — agricultural development and political participation — have been settled already. The remaining three are, according to analysts, far easier to solve (drug issues, victims and the actual end of conflict). Although it’s hard to believe, FARC commanders have committed themselves not to use kidnapping as a way to finance their existence anymore. Prisoners have been released and Congress has approved laws with never-before-seen majorities that would prepare the country for an eventual demobilization. A consensus has been established that agree negotiation is the only way to put this conflict to an end.

When complications arise, we need to remain unified and strengthen our efforts as a nation. These difficult moments are simply challenges that exist to prove that Colombia CAN and WILL have a peaceful future. We have come too far to look back. Let’s give future generations the opportunity to raise their children in peace: It’s our obligation. It’s now or never, so, TOGETHER, lets make this happen!