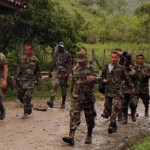 The agreement reached Tuesday between the Colombian government and the FARC outlining a path to political participation for the country’s largest rebel group “screams positive” for the peace process, said Latin American conflict expert Steven Dudley, despite historical reasons to be weary.

In an interview with Colombia Reports, Dudley explained that past events only highlight the importance of the most recent advancement in the Havana peace talks started nearly one year ago.

Dudley, a documentarian and Co-director of the Insight Crime analysis website, is the author of the critically acclaimed Walking Ghosts, a history of the FARC’s first attempt to assimilate into the Colombian government.

“Against all prognostications,” siad Dudley, “this peace process by this government continues to surprise us and really give people hope. And that’s important.”

On Wednesday, negotiators from the Colombian government and FARC rebel group came to an agreement on the second of six scheduled agenda items for ongoing peace negotiations. The deal reportedly revolves around a plan to convert the guerrilla group — labeled a “terrorist organization” by the United States and European Union —  into a legitimate political party.

In Walking Ghosts, Dudley chronicles a similar push made by the FARC during the late 1980s to incorporate itself into a leftist political coalition. Thousands of founding members from the ensuing Union Patriotica party were subsequently murdered by right-wing paramilitary groups, in a series of mass assassinations Dudley refers to as a “political genocide.”

“I think the situation is much different now,” said Dudley, when asked if the FARC had reason to fear similar repercussions this time around. “The situation when the Union Patriotica was created was much more volatile. It was much more dangerous on many different levels.”

Dudley explained that, in the 80′s, there were many actors who were looking to make their points through political violence, including paramilitary groups, drug traffickers and members of the government, but that today that behavior “has largely abated.”

Partly, that is because “the government is better [now] at prosecuting those who commit acts that are related to political activities,” said Dudley, who cautioned that ”if certain things that we saw in the 1980 repeat themselves, I think that we could have violence.”

According to Dudley, the FARC will find itself in a difficult position if it attempts to transition to a civilian political body.

On the one hand, the group cannot afford to maintain its “belligerent status” while establishing a non-violent movement, for risk of public backlash and violent reprisal.

On the other, even as a demobilized political organization, the FARC could face serious threats.

“I think that the most vehement opposition will come from those who believe themselves to be victims,” said Dudley, “[not just recent victims but also] historical victims,” like cattle ranchers and utility workers who have been consistently attacked by the FARC’s guerrilla units over the past several decades.

“There will be a series of interests who will look at them as those who victimized them for years and who have not necessarily paid the price that they should have paid… they may seek justice of their own,” admitted Dudley.

“If you slot in a recently demobilized guerrilla group…into a country with a 100 year old history of political violence…then you are invariably going to throw in a factor that is difficult to corral and predict what will happen.”

Despite the dangers of political integration, Dudley still believes the FARC have options going forward.

“If [the FARC] want [their political voice] to be relevant… they will want people who aren’t necessarily militants today with the FARC but who sympathize with their ideology and their political beliefs. My sense is that they’re going to have to look for a coalition with like minded groups and they’re going to have to look to broaden their appeal to be more of a mass party.”

The best reason for hope, he said, is the commonly held sentiment that war against the guerrillas is not the answer to solving Colombia’s near half century of armed conflict.

“What we know at least from 50 years of experience is that [war] hasn’t worked. If people like Uribe, think that’s a small sample size, [they’ll] tend to be in agreement with [him and say],  ‘Ok 50 years isn’t long enough to fight them, let’s fight them another 50 years.’”

But if peace talks keep producing deals, Dudley is optimistic that these dialogues can steer the country toward a different answer.

“If they keep coming out with intermittent agreements, each one that they get to is a step in the right direction.  It screams positive to me.”