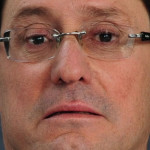 Without explicitly accusing the party of fraud, Santos said that he would “certainly have won” an open primary election held during the March Congressional elections, but “things happened that shouldn’t have happened” that “left a bitter taste.”

“There’s a group that doesn’t want me there,” said the former VP.

According to Santos, Uribe is risking his political future with Zuluaga on the ballot as the former finance minister lacks the charisma Santos — a cousin of sitting President Juan Manuel Santos — claims to have.

“I am a person with immense charisma. I reach people. During the campaign I would enter the forums and you could feel the popular passion. This capacity to touch people and to look them in the eyes you can’t improvise,” said Santos, adding that this is something Zuluaga “will have to work on.”

The former primary candidate claimed that his failure to get elected was a boost for his cousin’s confidence and ultimately led to the president announcing he will run for reelection in May.

“I guarantee you that if I had been candidate, the president wouldn’t have launched himself for reelection,” said Santos.

The Uribe Centro Democratico was launched by the former president as a political platform that sought to provide political representation for supporters of Uribe, who has been isolated from the political arena over his opposition to his successor’s policies.

The “Uribistas” have to said to want to “retake control” in order to suspend ongoing peace talks with rebel group FARC and follow the political path of Uribe’s former government that emphasized on a militaristic approach to curb guerrilla violence and the attraction of foreign investment.