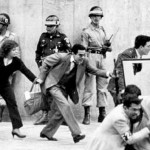 Victims and families of the 1985 Palace of Justice massacre rejected what they described as the Colombian state’s “partial recognition” of responsibility, calling for “justice” and “punishment” of the guilty as a tangible response to the state’s misconduct.

The Palace of Justice massacre took place 28 years ago where the M-19 urban guerrilla group took over Colombia’s Supreme Court in Bogota, taking the judges hostage and demanding that the president at the time, Belisario Betancur, present himself to stand before a symbolic trial.

In response, police and military units stormed the building using tanks and bombs in a violent response that left 100 people dead, including 11 of the 25 high court justices, and ignited the building into flame. Authorities at the scene, in an attempt to hunt down suspected guerrillas, also rounded up and tortured civilians indiscriminately, as well as “disappearing” 12 people.

While the Colombian government officially acknowledged “responsibility” on Tuesday while on trial in the Inter-American Court of Human Rights (IACHR), Colombia’s defense lawyer Adriana Guillen asked the international court not to press further indemnity payments for the victims, or enforce specific sanctions on Colombia, claiming the state had already made decisions to address the pending legal issues on its own.

According to magazine Semana, president of the Inter-American Commission on Human Rights, Jose Orozco, who submitted the case, said to the court, “it is confirmed that after the retaking of the Palace there were physical and psychological torture” and “the cases of disappearance and tortures continue unpunished.”

While Orozco admitted the Colombian state had already officially condemned “some” of the authority officials, but that so far, none of the condemnations had resulted in successful sentencing or punishment for those responsible for the crimes.

Pilar Navarrete, wife of one of the “disappeared,” rejected what she called “partial recognition” by part of the state, demanding “justice” for the victims and families whose lives were affected by the authority’s violations of human rights during the event.

“Cannot deny the execution, torture, disappearance and destruction of evidence to hide the truth that the actions were deliberate,” said Navarette. She called on the IACHR to sanction the Colombian government, arguing the “state will never act on its own.”

Yolanda Santodomingo, a law student visiting the Palace at the time of the guerrilla siege who was detained and tortured by the authority’s under suspicion of guerrilla activity, appeared before the court calling for justice.

Santodomingo said that under detention, she was beaten and threatened by plain clothes police before being taken to the police station where she was later released, although threats followed her for years.

“I want justice and protection,” said Santodomingo, between sobs, during testimony before the court.

The IACHR hearings in Brasilia, Brazil, concluded Tuesday and the ruling is expected next year at some point.