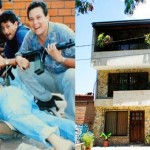 The Medellin house where infamous drug lord Pablo Escobar was killed is being advertised for sale again.

The five-bedroom house in the western part of Colombia’s second largest city is being sold by U. based rental agency Stellarview Realty, and is advertised as a buying opportunity for anyone who would want to turn the tourist site into a themed guesthouse, or open its doors to the public as a museum.

With a price of just over $250,000 the property will be outside of the price range of most average Colombians, and the agency, who published the advert in English, are clearly looking to rich foreign investors to snap up the property.

Escobar was shot dead on December 2 1993 on the rooftop of the two storey house by specialist “Search bloc” police members as he tried to escape over the roofs to a neighboring back alley. 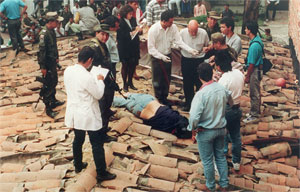 The photo of Escobar´s bloated and bloodied carcass lying on the rooftop in the Las Americas district has become famous and thus immortalized the western Medellin area as a tourist photo spot.

While the area has become popular with tourists wanting to take photos of the macabre scene, the family who owned the property from 2008 have constantly refused offers to allow entry to guided tours and allegedly turned down offers from the surviving members of the Escobar family to buy the house, when it previously went up for sale in 2012.

MORE: House where Pablo Escobar died up for sale

The bedroom where Escobar spent his last days has been inhabited by the house owner’s teenage daughter, and the family had refurbished the house inside, while leaving the famous roof spot as it was in 1993.

When the previous owner Omar Restrepo bought the house in 2008, it was in a bad shape, partly due to robbers and would be treasure hunters raiding the site and stealing everything, even electrical cords and light-switches, and smashing through wall in the hope of finding hidden treasure.

The house had been abandoned for a number of years, and became inhabited by homeless people and drug users before Restrepo bought the property and redeveloped it into an aesthetically pleasing family home.

The property made the news in late August 2014, when two armed men disguised as phone company employees entered the house next door, intimidated the owner and left after knocking a hole in one of walls in search of a cache of cash or weapons. It is unclear whether the men found what they were looking for.

The comparatively high price for the property and its blood soaked tiles might scare off many would-be buyers, but with the amount of tourists visiting Medellin growing every year, the opportunity to make a buck from tourists enthralled by the myth of the “king of cocaine” could see yet another lucrative tourist enterprise based upon Medellin’s dark and bloody history, following in the footsteps of the popular Pablo Escobar tours which run daily.