Jose Giraldo earns his living on the streets of Medellin selling humorous road signs and stickers with iconic images.

It is an eclectic offering, which includes the likes of Hello Kitty, Jesus Christ and Che Guevara.

But according to Mr Giraldo, stickers boasting the image of Colombia’s infamous drug lord Pablo Escobar are by far the most popular. 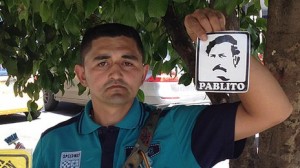 “The best seller is Pablito,” Mr Giraldo says of the crime boss, who was shot dead in Medellin while trying to escape from police 20 years ago.

Mr Giraldo is by no means the only one cashing in on the image of the man many consider the greatest outlaw of the 20th Century.

At the height of his power, Pablo Escobar was said to be the seventh richest man in the world, with his Medellin drugs cartel thought to be behind up to 80% of all the cocaine shipped to the United States.

His cartel not only trafficked drugs, it terrorized Colombia in the 1980s and early 1990s, bribing, kidnapping or killing all those who stood in its way.

Such was his ruthlessness he is widely held responsible for some 4,000 deaths. Others say the real number is closer to 5,000.

And yet, here in Medellin, some people still affectionately refer to Escobar as Pablito, and in the commercial district of Junin T-shirts and wristwatches emblazoned with his face as well as books and DVDs telling his story are on display. 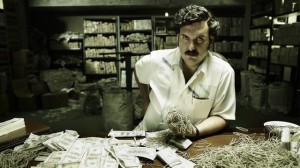 TV hit Colombian soap opera Escobar: The Boss of Evil has been a huge hit

The series has already been sold to 66 countries, including North Korea.

Pirated copies of the series are immensely popular in Medellin’s markets even as Caracol airs the series for a second time.

David Bustamante is one of those selling the DVDs. He says he has no qualms about making money out of the drug lord’s story.

“I don’t mind selling it. Maybe because his was a war that didn’t affect me,” says Mr Bustamante, who was just a baby when Escobar was killed.

Caracol has not released figures of the profits it has made on the series, but it seems to be on its way to becoming one of the biggest commercial successes in the history of Colombian television.

But not everybody in Colombia is happy about the commercial success of all things Escobar.

“In a way it is an example of the triumph of culture embodied by Pablo Escobar, in which profit, making three bucks, is more important than anything else,” says Rodrigo Lara Restrepo, whose father, Justice Minister Rodrigo Lara Bonilla, was shot dead on Escobar’s orders in 1984.

Federica Arellano agrees with Mr Lara. He lost his father in the 1989 bombing of a commercial plane ordered by Escobar in an attempt to kill presidential candidate Cesar Gaviria.

Mr Gaviria was not on board the plane – having cancelled his plans for security reasons – but all 107 passengers and crew, and three people on the ground, died in the attack. 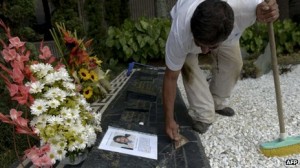 “Personally, coming back home and seeing his [Escobar’s] face on the TV screen is an insult, a slap in the face,” Mr Arellano says.

“It is also sending quite a damaging message. It is saying: ‘Go and become a criminal, because that way you can make money fast and lift your family out of poverty,’” Mr Arellano, who chairs a foundation for Escobar’s victims, argues.

“Thankfully there are still some sensible people who rejected the idea of having the Pablo Escobar trademark registered,” he adds, referring to a recent move by the drug baron’s family to cash in on his continued popularity.

Mr Marroquin, who lives in Argentina, says he does not sell the garments in Colombia out of respect for his father’s victims.

But, at least in Medellin, it is not difficult to find T-shirts bearing Escobar’s face, or Colombians who still see the founder of the Medellin cartel as a sort of hero willing to buy them.

“People really like them because it’s like wearing a [picture] of a Saint you have faith in,” explains Jenny Zapata, who sells Escobar-themed T-shirts at Pasaje Junin in Medellin.

“The thing is, some people see Pablo Escobar as a bad guy and others see him as a hero, as someone who was able to do the things that no-one else was able to do here in Medellin. And a good example is the barrio [neighbourhood] he built,” she adds.

The neighbourhood, nicknamed by its inhabitants Pablo Escobar, sits atop one of the many hills that surround Medellin’s city centre.

It is one of the many “gifts” Escobar gave to the city’s poorest inhabitants in an attempt to secure their loyalty.

It is this sort of generosity which explains why, two decades after his death, he remains a cult figure among some.

A big flag with the drug baron’s face clearly marks the neighbourhood’s entrance. 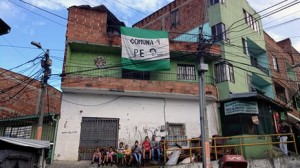 “We respect the pain of his victims, but we ask people to understand our joy and gratitude, what it means to move out from a garbage dump to a decent house,” Ubernez Zavala, a local community leader, tells the BBC.

According to Mr Zavala, Barrio Pablo Escobar has become a popular stop for tourists, with several companies in town offering Escobar-themed tours.

He says residents do not mind the commercialization of Escobar’s image, but he acknowledges that there is unlikely to be any agreement between those who see Escobar as a monster and those who still worship him as a saint.

“The only consensus is that Pablo Escobar is part of our history,” he concludes.