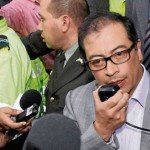 Supporters of dismissed Bogota Mayor Gustavo Petro rallied in different sections of the capital city on Friday, converging on the center in protest, after he was removed from his post this week by Colombia’s Inspector General.

Rallies began after Inspector General Alejandro Ordoñez announced the dismissal of Petro earlier this week, barring him from public office for 15 years, over  “irregularities” during the transfer of the city’s waste collection to a public service.

After being dismissed, Petro has called various protests throughout the week. For Friday, he called “for the largest one yet,” stressing the importance that the demonstrations remain peaceful to achieve their goals and keep a positive image.

“Friday must be the largest day yet for the week’s mobilizations. The great success we are working for depends on not experiencing a single act of violence,” said Petro.

On Thursday, several protesters stripped naked in front of Inspector General’s Office calling for the reversal of Petro’s dismissal as well as calling for Ordoñez’s resignation.

Since the dismissal of Petro, the former M-19 urban guerrilla turned leftist political leader, the mayor’s popularity rating has risen substantially from 30% to 52% approval rating, while the Inspector General’s rejection rate has reach 56 percent.

Colombia’s former Prosecutor General Viviane Morales sent an open letter calling for the resignation of Ordoñez after his controversial decision.

The decision to dismiss the mayor has received criticism from abroad including remarks from the incoming U.S. Ambassador to Colombia who said it may hinder peace talks by creating distrust among the country’s largest leftist rebel group the FARC.

The dismissal also drew the attention of the United Nations’ whose High Commissioner for Human Rights in Colombia told press that Ordoñez “is acting according to his mandate, but must also respect human rights.”

The UN said it had requested a meeting with the Inspector General to review possible conflicts with democratic rights of those who voted for Petro and international jurisprudence.