Electoral authorities say nearly 250 municipalities in Colombia are at risk of violence or fraud affecting the referendum on an anticipated peace deal with rebel group the FARC, adding to the uncertainty surrounding the outcome of this historic vote.

In an August 12 press release, Colombia’s Electoral Observation Mission (Misión de Observación Electoral – MOE) said the yes/no vote expected to be put before the Colombian people on whether to accept a final peace agreement between the government and the Revolutionary Armed Forces of Colombia (Fuerzas Armadas Revolucionarias de Colombia – FARC) could be marred by violence or fraud in as many as 243 municipalities across the country.

The two sides agreed to a bilateral ceasefire in June, and the announcement of a final peace deal in the coming months appears likely. But the peace plan calls for Colombian voters to have final say on deal.

Of the 243 municipalities highlighted by MOE, 53 are at “extreme risk,” 83 are at “high risk,” while 107 are at “medium risk” of violence or fraud. More than half of the municipalities in the departments of Chocó, Arauca, Cauca and Putumayo are at risk. Antioquia registered the greatest number of municipalities at risk, with 13.

MOE based its classifications for likelihood of electoral violence on the presence organized crime groups, guerrillas, coca crops, illegal mining and potential for massive displacement, among other variables. 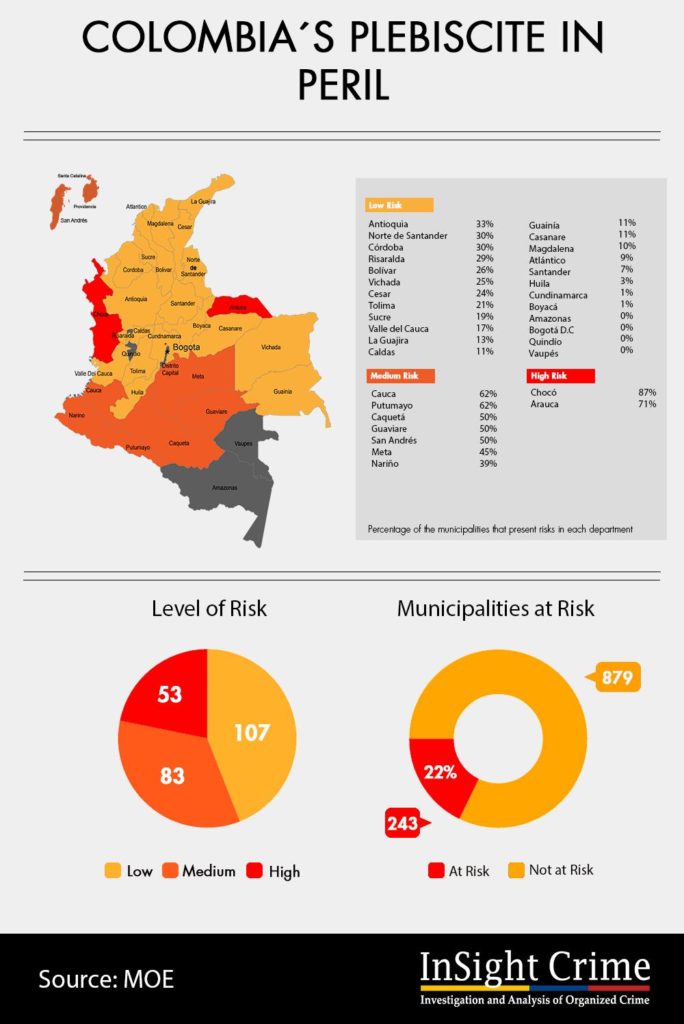 The high potential for violence and fraud cast a pall over a referendum process that is already politically contentious. Recent polls offer conflicting indications about whether or not Colombians will vote to approve the peace agreement being hammered out by the government and FARC. And earlier this month, former president and current Senator Álvaro Uribe, long a vocal opponent to the peace process, announced his political party would spearhead the “No” campaign. This environment of uncertainty is only increased by the unprecedented nature of this type of vote in Colombia.

“One must take into account that these are not normal elections because there are no close antecedents of other plebiscites,” said MOE Director Alejandra Barrios Cabrera.

MOE’s report also illustrates how there are many illegal armed groups apart from the FARC that have a stake in a potential peace deal. Neo-paramilitary groups such as the Urabeños and left-wing guerrillas like the National Liberation Army (Ejército de Liberación Nacional – ELN) could benefit immensely by occupying strategic territory left behind by a demobilized FARC, but they will also become the principal targets of the government’s crusade to eliminate criminal actors. This calculus will help determine the level of organized crime violence surrounding the referendum; activists in rural Colombia have already reported receiving death threats from the Urabeños as a result of their work educating people about the peace process.