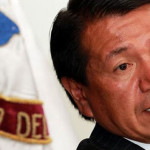 Victims should be involved in ongoing peace talks between the government and guerrilla group FARC said the head of the department charged with the legal protection of civil and human rights in Colombia on Wednesday.

Ombudsman Jorge Armando Otalora said he would ask Colombian President Juan Manuel Santos to enable the participation of victims of the conflict as well as members of island and indigenous communities at the negotiating table in Havana.

He also used a emphatic speech on Wednesday to underscore the importance of the peace talks in advancing the cause of human rights in Colombia.

Otalora said nearly 5.8 million people are officially registered with the state as victims of Colombia’s conflict.

He suggested the peace talks should involve representatives of these victims who were democratically elected last October in Girardot under the National Bureau of Victims Effective Participation framework.

This is not the first time that there have been calls for the inclusion of victims in the peace process.

In August, Senator Juan Fernando Cristo urged Santos to focus on the rights of victims during the talks.

In his speech this week, Otalora also affirmed his support of the peace process in general.

“I am absolutely convinced as Ombudsman in our country I can not be an enemy of peace and agree that I and the other 47 million Colombians, we are waiting for the peace process,” he said.

Delegates of the FARC and the government initiated formal talks little over a year ago. Since then, agreement was reached on agrarian reform and the rebels’ political participation. Victim compensation has been scheduled as the fifth of six points on the agenda.