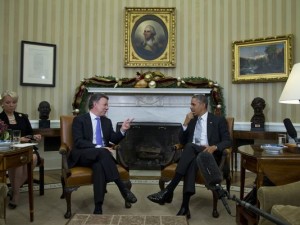 While “it is not easy,” Obama said that Santos is doing the right thing in seeking “a lasting and just peace” with the Revolutionary Armed Forces of Colombia (FARC).

“Obviously, there are going to be some very challenging questions moving forward,” Obama told reporters after he and Santos met at the White House. “I’m pleased to see the president’s strong commitment on that front.”

Santos made his visit to Washington just days after announcing he would seek re-election in Colombia.

Obama said that he and Santos also discussed increase trade with Colombia, as well as new education, energy and technology-sharing agreements.

There has been a 20% increase in trade between the United States and Colombia since the two nations signed a free trade agreement during Obama’s first term.

The United States has been providing security assistance to Colombia for years, but has gradually turned it into economic assistance in recent times.

In his comments, Santos told Obama that “we have gone well beyond the usual items that we used to discuss, like security, like drug trafficking. … We are now expanding into topics like education, energy and mutual cooperation — what we can do regionally.”

Obama also noted that both Colombia and the United States are participating in a major event next year — the World Cup soccer tournament in Brazil. While wishing each nation well, Obama said. “I think it’s fair to say that we will be rooting for our teams.”

Both presidents pointed out it is not yet known whether Colombia and the United States will play each other.

“I certainly hope they won’t meet in the first round,” Santos said. “But we can maybe eliminate the U.S. team later on.”

Replied Obama: “All right, we’ll have to make a wager on that. We’ll see if the actual game comes up.”