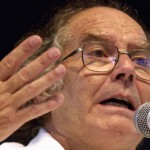 An Argentine human rights activist and Nobel Peace Prize winner spoke out against Colombia’s planned new ambassador to Argentina due to the candidate facing accusations of human rights violations, reported a local newspaper on Thursday.

In his letter Perez wrote, that an ex-commander being accused of “severe human rights violations in Colombia” would be unbearable as new ambassador to Argentina.

Navas is currently under investigation in Colombia for his involvement in the so called “Massacre of La Horqueta”.

On November, 21, 1997, 14 civilians were killed in Colombia’s central state of Cudinamarca in attack allegedly executed by the combined forces of the defunct paramilitary group, the AUC, and special units of Colombia’s armed forces.

The investigation, which started in May 2013 by the Court for Justice and Peace in Medellin, currently indicates that Navas did authorize the “disappearances” of civilians during the operation, according to newspaper El Espectador.

Perez, who still works as politician, journalist and activist at the age of 82, won the Nobel Peace Prize for his human rights work under the military dictatorship during the 1970s in Argentina.

Having suffered months of imprisonment and torture under the military dictatorship himself, Perez expressed his fierce rejection of the idea of awarding a person accused of such heinous crimes diplomatic immunity.

“Argentina has adopted the defense of human rights as a national policy, promoting the invalidity of impunity laws concerning crimes against humanity during the military dictatorship. This makes us think that it is unbearable to assign a military member who violated the human rights of the Colombian people,” said Perez