Nicaragua, US, and Russia fight drug trafficking together in contested waters with Colombia 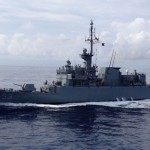 Nicaragua’s military said Wednesday that they have been conducting anti-narcotic operations with the United States and Russia in contested maritime zones, marking a new chapter of a dispute over the jurisdiction of waters surrounding the Colombia-owned island of San Andres.

The Inspector General of Nicaragua’s armed forces, Adolfo Zepeda, said that their navy and those of the US and Russia have been fighting drug trafficking in maritime zones around Colombia’s San Andres ever since the International Court of Justice (ICJ) granted them jurisdiction over those waters late 2012.

“We have a cooperative agreement to prevent illegal substance trafficking in the Caribbean sea with the United Stats and with the Drug Control Service of the Federation of Russia,” said Zepeda.

Nicaragua authorized the entrance of US and Russian armed forces into Nicaraguan territory last November and this past March respectively, emphasizing that the two countries could monitor the “areas marked off” as designated by the ICJ.

For the Nicaraguan military leader, these waters are often used as a direct route for drug traffickers between Colombia and the United States.

This marks a new chapter in a year old dispute between Colombia and Nicaragua over very valuable maritime zones that have historically been assumed to be part of Colombia.

The dispute involves an ICJ ruling made last November, declaring roughly 50,000 square miles of ocean surrounding the San Andres archipelago as part of Nicaraguan maritime territory. The islands, according to the ruling, would still be under Colombian control, but Colombia would lose out on fishing and trade activities it currently performs in the area, as well as right to any oil found in what prospectors believe is a promising piece of ocean territory.

Colombia has declared the ruling time and time again “inapplicable”, and has refused to cede the territory in question.  President Juan Manuel Santos has called Nicaragua’s behavior “expansionist” and has largely ignored the ICJ’s ruling thus far.

Colombia has yet to make a statement about the news of the US and Russia working with Nicaragua.

The post Nicaragua, US, and Russia fight drug trafficking together in contested waters with Colombia appeared first on Colombia News | Colombia Reports.