“We are making history: Uruguay approves the regulation of marijuana” reads this poster by an advocacy group that lobbied for state regulation and control of marijuana. Credit: Courtesy Proderechos. 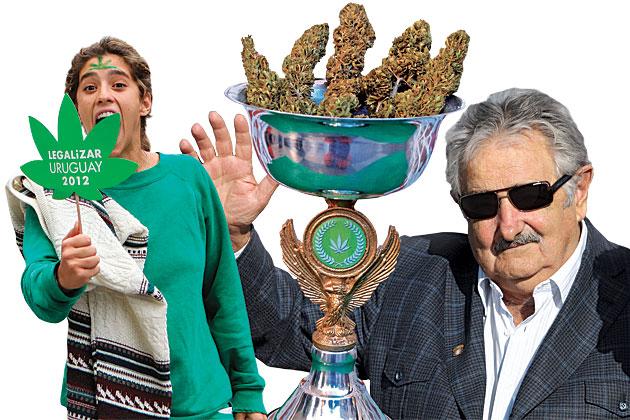 MONTEVIDEO (IPS) – Uruguay, about to become the first country in the world where the state will fully regulate production, sale and distribution of marijuana, will spend the next few months selecting a good quality strain of the crop that can be sold at a price similar to current illegal prices.

Uruguayan President José Mujica signed law 19.172 on the regulation of marijuana on Dec. 23. But it won’t go into effect until April, 120 days after it was approved by Congress on Dec. 10, and once the government has established specific regulations for the new legislation.

Since the 1970s, consumption and possession of small amounts of marijuana for personal use have not been penalized in this South American country of 3.3 million people sandwiched between Argentina and Brazil. But cultivation, sale and distribution of the drug have been illegal up to now.

When the 44-article law enters into force, the entire sector will be under the regulation and oversight of the Institute for the Regulation and Control of Cannabis, a new government institution created by the law.

But there is much to do before April. Among the most important steps are to decide the type of marijuana to be planted, who will grow it and at what cost, and what price it will fetch in the pharmacies.

The registries of users and others involved in the different marijuana-related activities also have to be created, as well as the so-called cannabis clubs, to ensure the traceability of the legal strain of marijuana.

Social organisations and activists are studying the best way to produce competitively-priced high-quality marijuana while involving small and medium Uruguayan producers and preventing foreign companies from taking over the activity.

The aim of the law is to “put the availability of marijuana for users in the hands of, or under the control of, the state,” Senator Roberto Conde of the left-wing governing Broad Front told IPS.

“A free market of marijuana or other drugs is not being created here,” Conde explained. “People will have access to marijuana by planting it themselves, in cannabis clubs, or from pharmacies, by presenting their ID card.”

Legal marijuana – up to 40 grams a month (around 40 joints) – will only be available to residents of Uruguay who have signed up for a federal registry.

Individuals will be allowed to grow up to six plants or 480 grams a year.

“That is what is technically estimated as reasonable, to keep someone from falling into problematic use of the drug,” the senator said.

Martín Collazo, with the Proderechos human rights group, said public health will be the area that most benefits from the law. “Eighty-five percent of users of illegal drugs in Uruguay only consume marijuana,” which means the illegal market could shrink by a similar percentage, he argued.

“Contact with the clandestine market facilitates access to other substances, like cocaine or ‘pasta base’ [a cheap cocaine derivative], which are sold in the same places,” said Collazo, who also belongs to the Responsible Regulation coalition, made up of organisations and personalities in favour of the regulation of marijuana.

The price of marijuana to be sold in authorised pharmacies has not yet been set. Collazo estimates that the price per gram should be between 1.00 and 1.50 dollars – the current cost of illegal cannabis.

“There is a big comparative advantage in terms of quality, because illegal marijuana is very bad,” the activist said. But he warned that it can’t be more expensive than on the illegal market, “because there would be a segment of the population that would continue to buy it on the black market.”

Proderechos has been working with agronomists and economists since November, and has formulated production models that confirm that marijuana could be produced in Uruguay at that price.

The Drug Policy Research Centre based in Santa Monica, California says illegal production and sale of drugs is more expensive because of the high costs of security, transport and protection of merchandise.

Collazo believes practice will show to what extent that is true. If marijuana has to be cheap, he said, the quality is likely to be inferior to what is sold in the Netherlands, where the drug is legally sold in special coffee shops.

“But we don’t have to reach that level of quality in the first year,” he said. “This has to be seen as a gradual process of developing the chain of production.”

He explained that the production of one ton of good-quality marijuana could cost around 250,000 dollars – between 0.25 and 0.30 cents per gram – “in a low-tech setting, with one or two harvests a year.”

The expert said that in the current clandestine market, the marijuana comes from Paraguay, and includes “leaves, stems, really bad quality flowers, and additives like ammonia, which are put on the compact bricks to keep them from drying out in transportation.

“Now we’re talking about selling buds,” without leaves or stems, which, “even if they are not big and beautiful are an excellent quality flower,” he said.

“We are generating our own information, with the support of different professionals, and we are coming up with proposals that we will formally present later,” Collazo said.

The aim, he said, “is to generate production schemes that can easily be followed by small and medium producers at a reasonable cost, and that will put marijuana on the market at a price similar to those on the black market.”

Regarding the possibility of guaranteeing traceability of the drugs circulating in the new regulated market, Collazo suggested “trying to get growers who produce for the pharmacies to always plant the same strains.

“If the growers take the authorised strains and use cuttings from the mother plant, they’ll always have the same crop, genetically,” he said.

That traceability would only be lost when producers introduce new varieties, he added.

Collazo said it would be easy to maintain traceability in sales through pharmacies in the tightly regulated and controlled new market.

But “other solutions would have to be studied for people who grow their own pot, and for the cannabis clubs, because those are much more difficult to control,” he added.

Senator Conde, on the other hand, said it would be easy “because from a scientific point of view, the advances made today are so huge that molecular traceability of the substance is possible, and in Uruguay we have sufficiently developed technology, and whatever we don’t have, we can ask for.

“Instead of setting a price, a fee will be set for users to pay for the public service of making a product that is chemically controlled from every point of view available to users,” he said.

Conde added that whether or not the state will subsidise marijuana in any form “is being debated” in the government.

“This will be decided within the 120 days we have for creating the regulations for the law. I don’t know if a subsidy will be necessary to implement it. If it is, it wouldn’t be an isolated subsidy, but just one more cost in our overall health policy,” he said.